How this internet user built the first coffee brand in Namibia

In 2008, when the subprime mortgage crisis hit the global economy, Dennis de Wet was working on the Isle of Man for a real estate syndication company that allowed investors to pool their money for a slice of real estate. This was a catalyst for his decision to leave the corporate world. â€œYou spend eight to ten hours a day working, so it would be a bonus if you really like what you’re doing,â€ he says.

Born in Namibia, he studied financial analysis at Stellenbosch University in South Africa before starting his career as a financial controller for the real estate company which then seconded him to the Isle of Man. â€œI realized that if I stayed in the company 10 or 20 more years, even as the CEO of the company, I would still be pretty miserable. I am a dreamer, a visionary. I like the new things and the following ideas. I have met people who would wake up in the morning and love what they were doing, and I was jealous of that.

He listed the things he was passionate about: surfing, the Grand Prix, wine, food and coffee and looked at each industry to see if he could spot a viable business opportunity.

Returning to his home country – especially the town of Swakopmund – was always an option for De Wet and his young family. While still on the Isle of Man, he began to research specialty coffee roasting as a possible future venture. At the time, the industry was only just taking off in neighboring South Africa but had yet to gain a foothold in Namibia.

Trying to find roasters in South Africa who could share their ideas was difficult. â€œIt was such a closed industry. Even though I explained that I was planning to do it in Namibia, they still thought I would be a competition, â€he recalls. He eventually found a roaster in Cape Town who was happy to talk to him and 12 years later they became good friends.

In 2010, the family moved to Namibia. De Wet trained on an espresso machine to hone his barista skills and had imported coffee from his South African contact in restaurants to gauge interest.

The following April, he decided to take the plunge and ordered his roaster in the United States. To cover the costs, he took out a loan from his father. He also began the process of registering the Slowtown Coffee Roasters business and brand. In the six months it took for the equipment to arrive, De Wet scoured the streets to find the perfect location, but the owners weren’t keen on providing him with top-notch rental space. â€œThey couldn’t grasp the concept of a coffee roast,â€ he says.

Luckily a friend called to say their engineering company had space available. â€œThe roommate had moved and his boss was happy that I took the vacuum as long as he could drink some coffee and play guitar in the store,â€ laughs De Wet.

In October 2011, Slowtown opened its first store in a central and popular location in Swakopmund. Today the company has a chain of six outlets: the place of origin and the roaster in Swakopmund, one in Walvis Bay and three in the capital, Windhoek. She roasts four tonnes of beans and sells 30,000 cups of coffee per month. 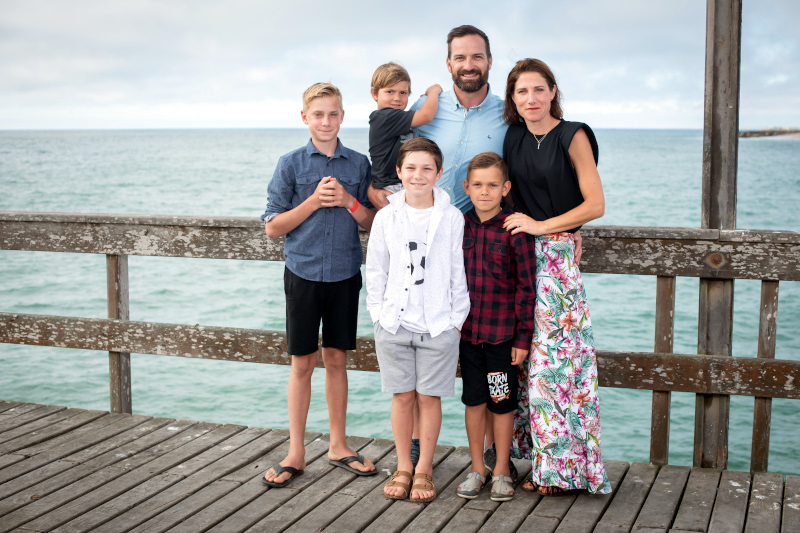 De Wet (middle) and his family.

Build a brand and grow slowly

Growth has been “slow and steady,” according to De Wet. â€œI repaid my father’s loan a year later on his terms. Since then it has always been a seed business. We’ve been approached by venture capitalists and potential financial partners, but I’m glad we did it that way. This allows us to remain agile and resilient. All the money we earn is reinvested in the business.

The first year, Slowtown only had one table in the shop, purchased at an auction. Initially, the company sold around 15 cups of coffee per day. â€œIt was a rough start. What was great, however, was that the same customers kept coming back every day. We have focused on the quality of the coffee and have built a loyal customer base.

De Wet has always sourced the coffee beans through the same coffee broker – based in Johannesburg, South Africa – with a proven track record of working directly with specialty coffee growers or cooperatives. It simplifies logistics; â€œI order my coffee once a month and it arrives within three days,â€ he says.

A little over a year after opening the first store, the small team brought their coffee to the annual tourism exhibition in Windhoek. It was the only company in the country to roast specialty coffee. Slowtown made more money in those three days than in a normal month, De Wet recalls.

â€œFor us, it was a big campaign to promote the brand and the awareness of our product in Windhoek, where the purchasing power was. “

The developer of The Grove shopping center in Windhoek approached De Wet in 2013 to rent a space. He was reluctant but finally agreed to take the smaller 26m unit2. â€œI thought nothing was venturing, nothing was winning, and we opened up. The response was unexpected, â€he says. It turned out to be so popular that the company quickly opened a second outlet in the mall.

Around the same time, Slowtown opened at another location in Windhoek’s CBD. This was followed by a store in the port town of Walvis Bay, a small factory outlet in its roasting in Swakopmund and, finally, one in the Maerua shopping center, also in Windhoek. 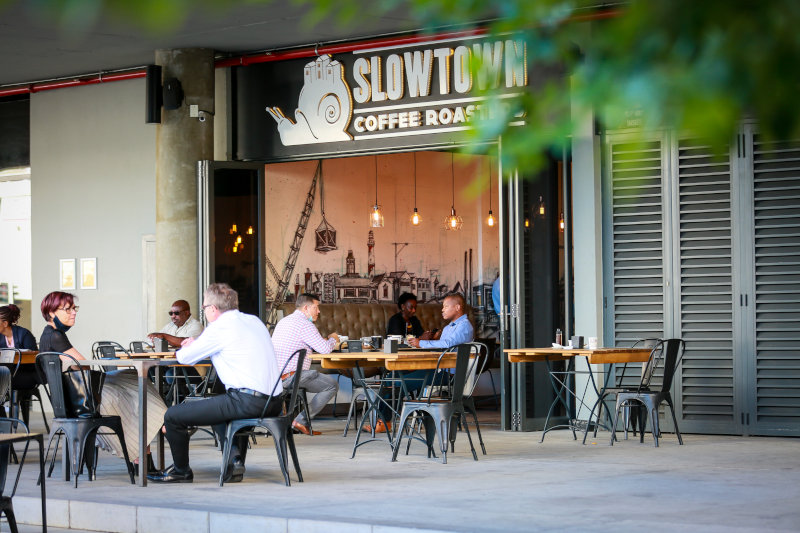 Wholesale orders have been a critical source of revenue for the business, with the business receiving many of these orders from people who have visited retail stores. One of the country’s most successful retailers, SuperSpar in the Maerua Mall, has asked to stock Slowtown coffee for the first year after opening. â€œFor a long time, this one retailer accounted for almost 90% of our wholesale sales. Today our income is probably split evenly between our own stores and wholesale. “

Slowtown offers a consultancy service to its wholesale customers for setting up coffee stations in their offices, lodges or hotels. The company assists with the equipment sourcing, setup and workflow of the coffee station, and provides roast beans and barista training.

De Wet explains that Slowtown branded cafes have always been the brand building vehicle for the company. â€œWholesale is easier money. There is so much that could go wrong with those 30,000 cups of coffee we serve every month; however, these cafes are what builds our brand every day.

De Wet’s business approach has always been clear: product quality and brand strength should drive sales. â€œI was never the type of person to call people to try to convince them to buy our coffee,â€ he reveals. 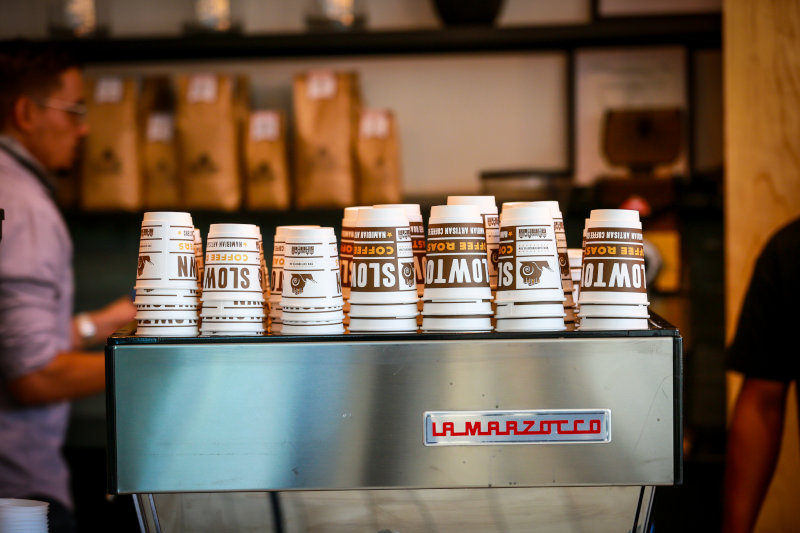 His strategy seems to have worked. The company is now adding Slowtown products such as caps and t-shirts thanks to demand from its loyal supporters. It is also focused on growth; two years ago a new roasting unit was added which increased its roasting capacity to 25 tonnes per month. â€œIt’s one thing to roast 25 tonnes, but it’s a whole different story to sell that in a small country like Namibia. We have to start looking for cross-border growth, â€says De Wet.

He believes South Africa could be the next frontier and that it would be a soft landing as he experiences after living and working in the Western Cape. However, opening another retail cafe is not necessarily on the agenda. â€œThe Internet interests me, it could open the doors to South Africa for me. If we have a good platform and offer our product online, that means we could test cross-border sales without breaking the bank if it doesn’t work.

South Africa is not the end of the horizon. De Wet has a few connections in Germany and when the time comes he sees no reason for Slowtown not to expand into the European market. â€œI have confidence in the product and the brand,â€ he says.